The following is a basic user guide for my 3D Art Template File for Blender. This file includes some basic examples of objects, lighting, and materials etc, that can be used for reference, or as a basic starting point to put your own 3D models into. You can download this file via my Buy Me a Coffee profile page for $6 (USD).

This guide contains the following sections:

What this file contains

With the exception of one of the materials (diamond), all of the elements within this file are relatively simple technically. Here is a view of screen grab showing the different elements in the document:

I have also included a small set materials.

As you can see, this template file includes a small set of cameras, backdrop and scene elements, objects, materials, and lighting options, all of which can be combined in different ways. The promo video shows a set of images and a few animations rendered from this file.

In this file I’ve also included examples of

Working with the Cameras

This Blender file contains two basic camera setups, an orthographic camera and a perspective camera. To switch the camera simply go to the scene properties and use the drop down menu.

You may need to make sure you are viewing through the camera by clicking the camera button in the viewport layout window.

I have aligned the perspective camera to point directly at the objects along the y axis. This composition provides a more natural feel as if you are standing in a room or space looking front on at the objects.

I have set up the orthographic camera to look slightly downwards on the objects in a way that works well with a three point perspective. If you don’t know what I’m talking about here, there are plenty of videos online that explain 2 and 3 point perspectives etc but the perfect example of 3 point perspective is a view of a cube where you can see three sides.

In this file I have grouped and aligned the objects that are more suited to the orthographic camera, however you can always see what the objects will look like through the other camera.

I have also set the camera to align to a target object. In this case this is just an empty object which I have positioned at the same coordinates of all the objects in the scene. This can be useful as in theory the cameras are always pointing at the same spot. If by chance you want to disable the constraint you can always delete the constraint by first selecting the camera and then going into the constraint properties and deleting it.

This file also includes some basic scene elements. You can see here that I have included a collection of studio backdrops for example. Most of these are exactly the same and are curved like a typical studio backdrop. I’ve labelled them according to which camera they are best suited to.

If by chance you want to edit the backdrop proportions, select the object, go to edit, select the edge and move along the appropriate axis. The curve in the backdrop is handled with a bevel modifier which you can easily tweak by first selecting the object (in the normal object view), and then check the modifier applied to it.

If you wanted to lower or raise the backdrop object simply select it and then change the Location on the z axis.

I also created a basic virtual room, which is simply a floor, far wall, and ceiling, which can work well with the perspective camera and also the area lights.

I have taken the time to set up some three-point lighting collections, which are basic the same except positioned slightly different for the different cameras. There are plenty of videos on Youtube explaining how three-point lighting works but it is basically about using a set of three lights to best illuminate your objects (key, rim, and fill).

One thing to keep in mind is that if you are using a floor plane (such as in the studio backdrops), particularly with a reflective material, you will most likely not need the fill light and possibly not the rim light either as light will be bouncing off the floor and rear wall.

I also included what I am calling a ‘Vaporwave’ light setup which shines two coloured lights on the objects. Again this is just an example that could be fun to mess around with.

So most of the objects are fairly straightforward.

I’ve included an example of an array of cubes that uses the array modifier. I’ve parented the array to an empty object that can be used to adjust the position etc.

I’ve also included some other arrays of cubes shaped into a spiral, and an array of spheres arranged in a 3D cube formation. Again I’ve parented each of them to an empty that can be used for positioning.

In the case of the spheres array you can see how I’ve also added a spinning animation sequence. (I’ll go through the animations next).

And I’ve also included an example of an object with a mirror modifier and an animation sequence of the mirror object spinning. With the mirror modifier one thing to be mindful of is that the modifier is connected to the camera. So if you copy the object it may create another camera to go with it.

The main thing about the animations is that I have created them to be seamless loops. So the end point is the same as the starting point. I cover this in detail in another Youtube tutorial. You will notice how the last frame is out one more frame than the endpoint. This is so as not to double up on the first frame when rendering.

I haven’t done too much with the materials here, mostly I have just thrown together a few very basic materials as examples to get things going. The one exception here is the diamond material. This is created with shader nodes and this material can be tricky to work with as the lights and the rendering settings need to be just right. The main thing is that you need to make sure there are plenty of light bounces, similar to the default Blender rendering settings.

Also with the materials I have intentionally kept them fairly basic. Mostly I have used only a few settings in the Principled BSDF shader. The Base Colour is fairly obvious. You can see that for the gold material I selected an orangey colour. Then for the metallic materials like Gold and Silver I have simply turned up the metallic and turned the roughness down a bit. Normally people will use more complicated systems to get ultra realistic gold but I think this is good as a starting point. To make a glass material you just need to set the transmission to 1. This will create a frosted glass if the roughness is at .5, or turn the roughness all the way down for clear glass.

You can get some interesting effects by applying the metallic materials to the scene elements, keeping in mind that they will reflect much more light in the scene.

I often turn my rendering settings right down. With the exception of the diamond renders in the examples provided, all those images were rendered at minimum light bounces, eg 1, 1, 1, etc. Rendering will naturally take a while depending on the complexity of your 3D and the power of your computer.

One little trick that often catches me out is that there is the visibility in the viewport as well as the visibility in renders which you can see here in the two columns of icons to the right. Whenever I’m going to do a render I go through and double check that they match.

To render an image you can simply go to Render – Render Image and then once the image has rendered there will be a menu above the image and select ‘Save Image’.

What can really help here however is to set the output location and file names.

I usually render my videos as images and then compile them later, but you can always change the file format to one of the video formats. I find it easier and more effective to render to images because the images are generally better quality than if they are compressed for video and it is easier to join things together if I end up doing the rendering in different sessions. I compile my images into video sequences using Adobe After Effects but this is not something I will cover here.

If you want to render to video from Blender you will need to do your own research into the different video formats etc.

The default dimensions of the camera are suited to standard HD video. You can always tweak this if you want to increase or lower the resolution. For example if you rendered the default settings at 200% this would be the same as high resolution 4K video dimensions (3840 x 2160px).

Now if I felt that the camera was too close or two far, there are different ways I could zoom the camera in or out depending on which camera I was using.

When working with this file I would start by first selecting which camera I want, and then I would consider whatever object I wanted in the scene.

If I wanted to add an object from another blender go to File – Append, locate the file, and then select the object.

Then I would apply some lighting and materials.

As a general rule you don’t want to use too many lights as they can end up competing with each other.

Otherwise I hope all this information helps. Please let me if anything is unclear, or if there is anything you think I should add to these notes.

And if you haven’t already, you can download the template file from my Buy Me a Coffee page for $6. This will also help support me to create more free tutorials and learning resources. 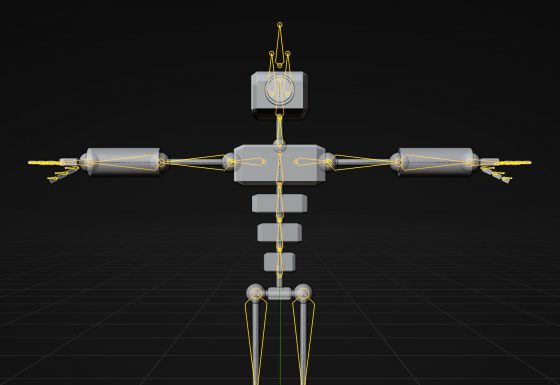 A basic robot example Blender file with the body parts attached to a Mixamo armature. 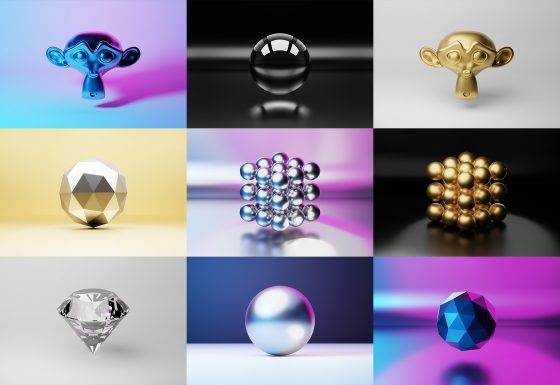